I've reposted my text below from FreakyTrigger as I surprised myself by how much I had to say about Madonna in response to her first number one record in the UK.


It is a compelling record – song seems the wrong word for it somehow – one that, like the red shoes, forces you to dance.


As mentioned in previous threads I was working on a summer camp near Toledo, Ohio at the time this was a hit (on both sides of the atlantic) and it was interesting to see how some of my American co-workers – many of whom were dyed-in-the-wool ROCK fans – responded so positively to this – largely because the whole package of image and sound was so compelling – the post-punk attitude and look may well have sugared the pill of what was effectively the disco revival. Her success in the US Pop charts (rather than just in the dance charts) also seemed to allow them to afford her legitimacy.
I don’t think any other woman in Pop has maintained such a high profile AND artistically successful career as Madonna. We are halfway through Tom’s project and she is still as likely to produce a number 1 now as she was then. She has managed to do so by removing from the foreground most of the qualities that were previously associated with women performers – vulnerable/confessional lyrics rooted in a stable/authentic musical identity. Even songs which did appear confessional were less authentic than they may have first appeared.
Being based in dance music allows her the opportunity to change style in a way that seems innovative yet not as fractured as say Dylan or Bowie changing from one genre to another.
For me Madonna embodies the triumph of the will – summed up in her phrase Blonde Ambition – rather than channeling some essential outpouring of her soul. The imperative mode of the lyrics to Into the Groove reflect the commanding role which has assured her continuing success. It’s easy to submit to that will and let yourself go – even if I can’t warm to her as much as I can to other performers.
Posted by Peter Slack at 09:47 27 comments: 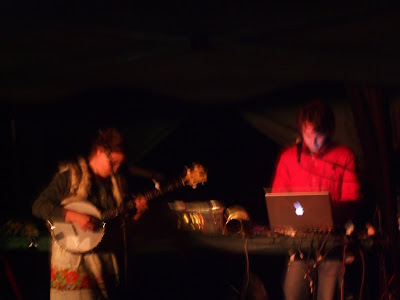 That's Lisa Knapp and Leafcutter John in the photo that is - courtesy of my digital camera straining at the limits of its powers.
I saw them tonight playing on a barge on the canal at Stoke Bruerne.
They're touring the Grand Union canal as it winds its way up country from London to Birmingham - performing work based on traditional songs processed through various effects and devices operated by both musicians.
Lisa Knapp comes from a more traditional folk background and supplies the more conventional input on instruments and voice while John captures and manipulates a variety of found sounds linked to the canal - such as water, engines or machinery.
Sounds and vocal/musical phrases were sampled, looped and layered to produce dense, evocative atmospheres over which Lisa (and occasionally John) would add melody and lyrics.
With just two musicians I felt the process of building these soundscapes was sometimes a bit slow. Sounds and phrases could have been sampled earlier rather than there and then but there seemed to be an imperative to show us how it was done - step by step - which sometimes worked against the dynamic of the performance - kind of like those programmes which show you what different instruments contribute to the sound of the orchestra.
I was talking afterward with a friend and we noted that this process of sampling, manipulating and repeating sounds had been done over 35 years ago by Eno with Roxy Music (and before him by Terry Riley - and no doubt others). John Martyn was playing his guitar through an echoplex unit around the same time so the process itself is not new.
Despite these (slight) reservations it was a rich and engaging performance which suggested the possibility of developing into something even better in the future - perhaps with some additional musicians.
Posted by Peter Slack at 15:15 No comments:

This Kind of Fire - video


Here's the video from Friday night - the sound isn't brilliant and is best heard on headphones. The performance was repeated at least five times and grew better and better...
Posted by Peter Slack at 13:51 No comments:


I've been a fan of Rickie Lee Jones for 30 years. I own most, if not all, of her records; I've seen her live three times and I'm due to see her again in November.
Like most women performers in popular music she doesn't get the respect that she deserves - certainly not compared to her male counterparts. She is often linked or compared to her ex-boyfriend Tom Waits but he has rarely if ever matched her capacity for musical reinvention and for translating intense personal experience into rich, powerful performance.
I think the public perception of her - if there is one - is that she is West Coast/Jazz-lite - probably on the strength of Chuck E's in Love which is the song for which she is best known (and which is way better than that description suggests).
She has not helped to alter her profile by releasing a number of cover albums over the course of her career - partly due to writers block, partly to satisfy record companies and partly because she loves the music . Although these albums have their strengths, what fans really hunger for are albums of new material.
Most of her work does reference jazz in some ways but often more in spirit. On Ghostyhead she blended it with trip-hop while on The Sermon on Exposition Boulevard she conjured up the beatnik roots of the Velvet Underground.
I think the Youtube performance linked here is from around the time of Ghostyhead and hopefully explodes some preconceptions.
Posted by Peter Slack at 11:25 5 comments:

This Kind of Fire 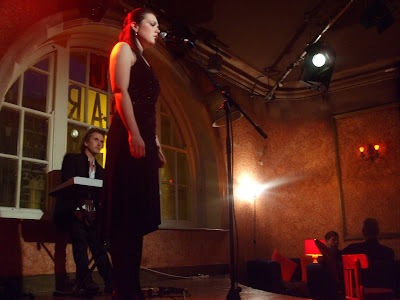 Last night saw the performance of This Kind of Fire - an installation/performance by Strange Beast at BAC in response to the work of David Lynch. I played a small part in the creation of the piece including these programme notes:

What is so theatrical about David Lynch?
The "memory theatre" was an aspect of a science of the imagination, practiced from Classical times up to the Renaissance.
It was used for the development of memory, and also as a "mind-map" - a connected symbolic space, often represented as a building, which spanned the imaginative or conceptual faculty.
In the magic theatre of Lynch’s movies:
We draw back the curtains - promenade to the next scene – we focus on words and actions but sense escapes us and attention wanders – what lies beneath? We draw back the curtains...

Through the darkness of futures past
The magician longs to see
One chants out between two worlds
Fire walk with me
Posted by Peter Slack at 05:23 1 comment:

That's a good question. One I may answer later. Let's just say I was outside and I was there for some time..
Posted by Peter Slack at 03:32 No comments:

I came to the place

I've been blogging for a while on work related issues but as I've begun to contribute to other forums and blogs I've increasingly wanted to have a space to write about stuff that interests me personally.
It helps clarify my thoughts to write them out - although whether other readers will agree remains to be seen.
Posted by Peter Slack at 11:23 1 comment: